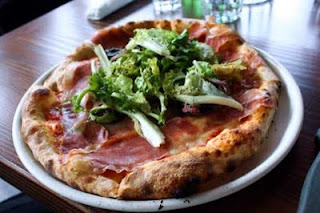 Good pizza and pasta is available at Zambri's on Yates Street in Victoria on Vancouver Island, British Columbia. However, you have to know this beforehand, because from the outside, the restaurant on the ground floor of an office tower with its large window front looks rather modest. Guests sit in front of simple wooden tables, where the food is served. There is nothing to suggest that Peter, the restaurant's chef, has won numerous prizes for his Italian dishes.

Born into a family of Italian descent, Peter grew up with his sister Jo in an environment where good food was important. Cooking and fresh food played a big role in her family. No wonder Peter started his career as a chef in good restaurants in Toronto and Vancouver. As he enjoys traveling, he also got to know the cuisine of Southeast Asia and India and spent - how could it be otherwise - four years in his family's country of origin, in Italy. There he learned how much the land, the food and the people depend on each other. And he brought this knowledge back to Vancouver Island, whose fertile soil provides everything to cook perfect Italian food with fresh ingredients.

Together with his sister Jo and her husband Calen, he opened Zambri's, a simple restaurant that was reminiscent of an Italian trattoria. This was between a pharmacy and a supermarket and offered a simple lunch. It wasn't long before word of mouth spread the reputation of the delicious food served there. And soon Zambri's pizza and pasta were showered with prizes. Vancouver Magazine awarded it Gold for Best Italian Restaurant, Peter won the Victoria Chef Of the Year award, the restaurant was featured in EAT Magazine and The Urban Peasant James Barber called it "the nicest little Italian restaurant in BC. Maybe even in Canada. " 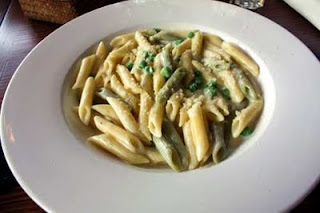 Zambri's - the best Italian in Victoria on Vancouver Island

Not much has changed to this day. Zambri's has moved to an office tower where it occupies the ground floor. But with its simple features it still reminds of a trattoria. The fact that the restaurant guests now give the door into the hand, contributes to the Italian atmosphere: it is loud, but happy. The guests obviously know what to expect. And we are also very pleasantly surprised by our lunch, for which we order pizza and pasta, as is typical.

My husband's prosciutto pizza looks very appetizing and obviously tastes good. I choose penne with peas and gorgonzola, which melt on my tongue. Antipasti such as Insalata Mista, Minestra with crostino or smoked tuna with canneloni, beans, boiled egg, salad, capers, anchovies and olives are also available for the larger appetite. In addition to pizza and pasta, guests can choose between a secondo, such as grilled sausages with broccoli and potatoes or meatballs with tomato sauce, peas, smoked cheese and polenta, and a variety of sandwiches. And Italian desserts such as tiramisu, ice cream, Coppa Italia and other delicacies must not be missed.

Perfectly matched to the food wines complete the meal at Zambri's

2011 awarded Zambri's two out of four prizes for the best wine list at Taste Wine List Awards. These prizes are awarded by the restaurant guests, among whom also the best representatives of the food industry mix. Zambri's was awarded the prize for the most customer-friendly wine list on the grounds that it is easy for guests to understand. Clear and unverschnörkelte descriptions of the wines facilitate the choice of the right wine. Special praise went to the staff, who was able to answer wine questions professionally and thus helped the guest in the wine selection.

Second prize went to Zambri's for its wine list, which offers a good selection of quality products that fit the menu in terms of price, quantity and style. The judges emphasized that Zambri's wine program also includes wines by the glass, as well as seasonal offers and wine dinners.

is available from Amazon.
At Amazon Pantry *

you can order groceries online or directly from
Shop around the corner
Become a Patron!
Booking.com