Celebrate with the Irish

What a day! Or rather: what a weekend! Because we are invited to St Patrick's Day Weekend in Ireland. And that's it. First of all, we get something like the "knighthood for bloggers", because the President of Ireland, Michael D. Higgins, welcomes us personally at Áras an Úachtaráin in Dublin, the residence of the country's presidents. That was a colorful heap that wandered through the venerable rooms of the residence in Phoenix Park.

Over tea and appetizers, Michael D. Higgins talked about "The Gathering", an invitation to all Irish and Ireland friends that he sent out into the world this year, with which he invited them to join the Irish on the island of St. Celebrating Patrick's Day and especially Irish culture, music, dance and the Irish soul. He called - and thousands came from all over the world! The result was a festival of absolute superlatives!

In Kilkenny we celebrated the Tradfest with the residents and an impressive marching band from Colorado, where the Celtic roots are celebrated. Irish bands tore the audience to storms of enthusiasm with their great rhythms that they coaxed from their traditional musical instruments. We also sometimes itched in our legs to tap the beat or - even better - to join in the spontaneous group dance. To the sounds of flutes, tin whistles, the Irish banjo and other old instruments, we wandered through the castle grounds and the historic town on the banks of the River Nore.

We watched as children, mothers, fathers and grandparents let themselves be introduced to the art of Irish dance, but also saw experts who have mastered this dance form perfectly. In bright sunshine we celebrated the beginning of St. Patrick's Day weekend with the Irish. Our St Patrick's Day in Ireland started in bright sunshine. 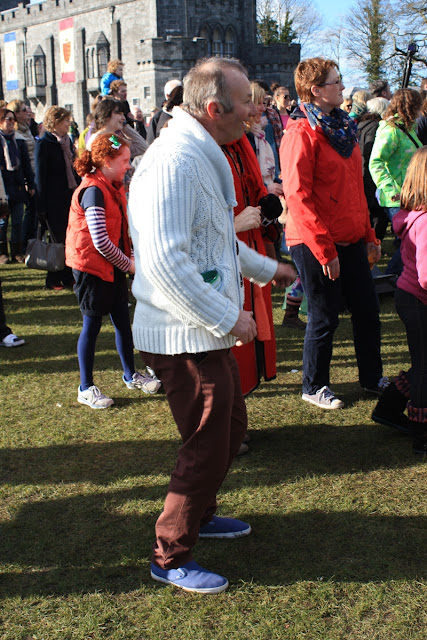 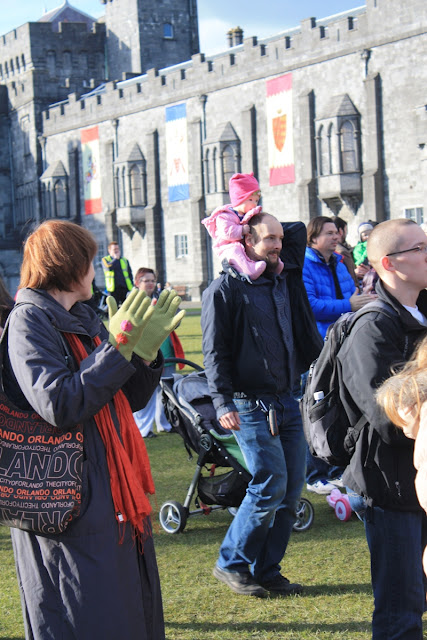 The definite highlight of this weekend, however, was the St. Patrick's Day parade in Dublin, This year, it consisted of two parts due to The Gathering. Many traveling Irish friends, including us, marched in the People's Parade, a kind of pre parade where visitors from all over the world could attend. Among them were groups from Poland, the USA, Canada, Australia and many other parts of the world. But they all had one thing in common: a lot of fun. The mood during this parade was fantastic. Everyone talked to everyone, you just could not help smiling. And not even the initial rain bothered the pleasure. In Ireland, this is just a part of it, and it does not bother anyone on St. Patrick's Day in Ireland. 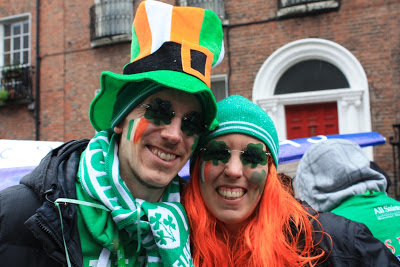 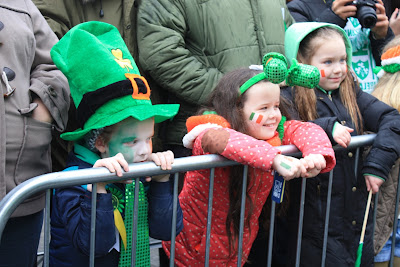 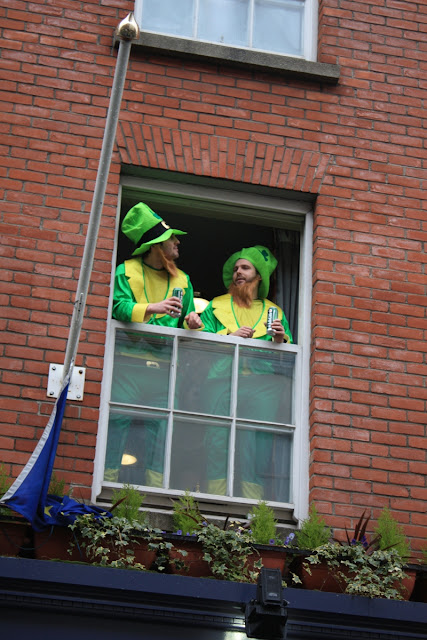 After our wild parade, the official St. Patrick's Day Parade followed. And it had something to it: after the official groups of the military, the navy and the dignitaries of the city followed one marching band after the other - from Ireland, Canada, the USA and many other countries, in the course of history Irish Has. In between, the imaginative wagons, groups and mythical creatures took turns - so many that we could not leave wondering. Our summary of the last three days: Hats off, dear Irishman. You really know how to celebrate and have a great party! 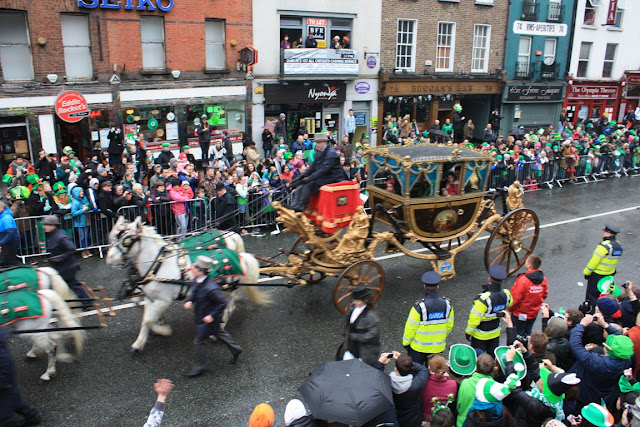 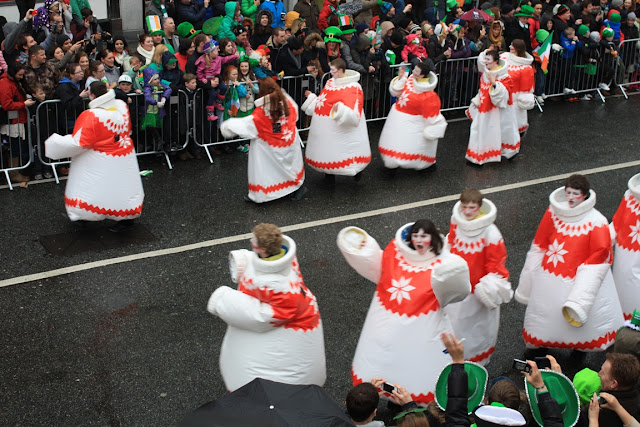 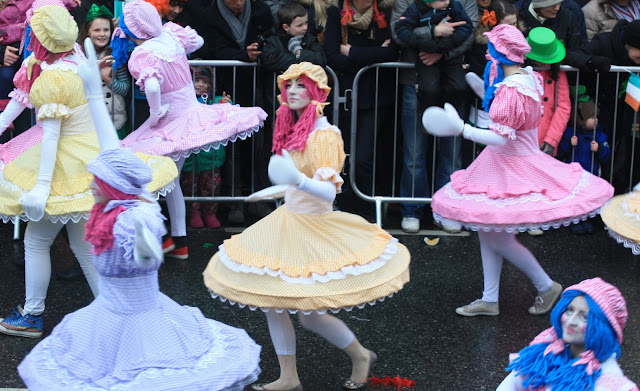 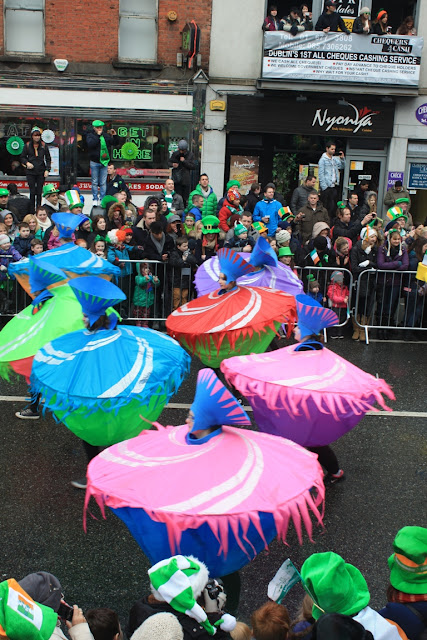 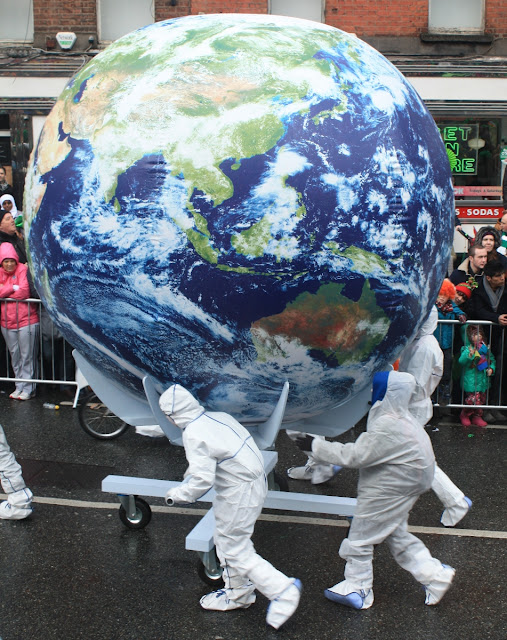 In this video, you can smell the joie de vivre that trotted the city in this parade of all pores, formally. St. Patrick's Day in Ireland is fun - no matter what the weather:

Check out Petar's video from the St. Patrick's Day Parade

Getting there
Lufthansa and Air Lingus fly to Dublin.

Dublin Prepaid Card:
At a Dublin Prepaid Card * In addition to admissions to numerous attractions and museums, the Hop on Hop off tours by bus and boat also include the Air Shuttle. You can easily book this card through our partner Get Your Guide.

Dublin Sightseeing Tours:
In addition to the Hop on Hop off city tours, there are others Sightseeing Boat Tours in and around Dublin *for which you can also book tickets through Get Your Guide and avoid waiting in Dublin.

Transfers:
Reserve yours Transfers from the airport to Dublin or to your hotel * here.

Tickets and tickets:
Tickets for various Sights and the Book of Kells Early Access Tour * here.

Hotels in Dublin:
Dublin Hotels * You can book through our partner booking.com at this link.